Where Does Responsibility For Happiness Lie?

“Nobody is responsible for your happiness but you.”  Such a simple and often quoted phrase, yet it has the potential to be one of the most damaging pieces of advice one can give.  My belief is that the underlying intent of these words is to encourage self-awareness and discipline to understand what creates happiness within us and make conscious choices to be involved with people and activities to achieve that end.  From this perspective, “I am responsible for my own happiness” can serve as a useful mantra to help guide our daily decisions.  Indeed, if we expect someone else to fundamentally change the nature of who they are for our benefit, we are not making a choice that is likely to result in happiness. 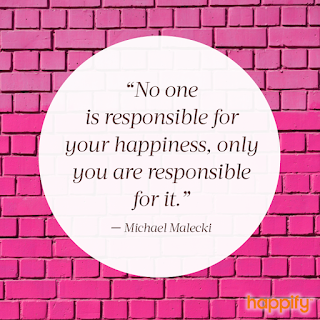 What I see more often, however, is this phrase used as a trite response to someone else who is in pain when we can’t be bothered to hold space for them through their suffering.  Can you imagine approaching a hungry child living in poverty, a parent whose star athlete teen was paralyzed by a drunk driver, or a groom whose bride was killed in a robbery attempt the night before their wedding and saying, “You are responsible for your own happiness?”

We wouldn’t consider giving that advice in those cases, yet many people don’t think twice about saying those words to someone who feels trapped in an abusive relationship, or at a job they don’t enjoy, or whose 20-year marriage has ended.  This guidance isn’t particularly helpful, and in some cases, can propagate the feelings of inadequacy that are already plaguing that person in those circumstances.

Allow me to back up a bit, though, and explain my issues with this phrase.  In the 1970’s, psychologist Paul Eckman defined six core emotions experienced by all people:  Happiness, Sadness, Fear, Disgust, Anger, and Surprise.  Additional core emotions have been identified since that time, the below wheel also includes Bad.  There is an important distinction between an emotion and one’s feelings, affect, or mood.  An emotion is a physical response to external stimuli controlled by areas of the brain like the amygdala and prefrontal cortex.  If you have heard of the “fight or flight” response, you are already aware of the physiological changes triggered by the sympathetic nervous system in response to one core emotion, fear.  In contrast, a feeling is a mental state and is based on how you experience and interpret an emotion.  This graphic shows common feelings we express in response to the core emotions. For example, my spouse is diagnosed with a terminal illness (trigger), I experience sadness (increased heart rate and skin conductance followed by tears), and I feel grief and despair.

My first issue with the topic phrase is that it sets an expectation of being able to control a physiological response to an external trigger.  The ability to choose an emotion is no different than any other physical sensation.  Imagine being stuck with a needle and being told you are responsible for feeling pain, and that you could instead choose for it to feel like being licked by kittens.  Try putting a hot pepper on your tongue and convincing yourself it really tastes like cotton candy.

People with some level of emotional intelligence can choose how they react to a feeling, and with a lot of self-work, can also learn to moderate what feeling they have in response to an emotion.  Studies have shown that people who are healthy and practice a mindset of gratitude are more likely to experience happiness.  However, the ability to control the body’s physiological response to an external stimulus is not commonplace.  One could argue that you can choose what external triggers you expose yourself to, but it is unreasonable to expect that you can shelter yourself from all negative stimuli in the world.  I remember the day I went to the mall and bought myself a beautiful pair of diamond earrings to match a diamond necklace I received as a gift.  That same day, I returned to my car to find that someone had backed into it and didn’t leave a note.  A few months later, I went for a walk and returned home to discover one of those earrings had fallen out.  I could have avoided the negative feelings associated with my car being damaged and losing an earring had I not gone to the mall that day, but giving up happiness to avoid potential sadness or anger is no way to live.

This leads into my second issue with that phrase.  Happiness shouldn’t be the goal in every situation.  We are supposed to feel a wide range of emotions.  It is not only healthy to experience an emotion and work through it, but it is necessary for growth.  I have known a few people who try to live out only positive feelings.  They will express when they are angry, but won’t work through it.  Likewise, if you try to talk about a difficult feeling you are having, they will shut down the conversation until the uncomfortableness leaves.  The resolution to any disagreement is pretend it never happened.  While their outward positivity is quite charming when you meet them, they are exceptionally emotionally immature and lack the ability to create any real depth in their relationships.

I also have a problem with any advice that marginalizes legitimate mental health struggles.  When I was in college, I attended a church where I was encouraged to pray more when I started to feel a little depressed, because happiness comes from God, not antidepressants.  This is the most dangerous use of the phrase “You are responsible for your own happiness” that I can think of.  Saying that to someone who is clinically depressed is like telling someone it is their fault they have cancer.  As a cancer survivor, that wouldn’t go over well with me.

Finally, I have an issue with that phrase because when interpreted literally, it encourages a self-centered and entitled attitude in favor of compassion and empathy.  Taking responsibility for your own happiness shouldn’t come at the expense of your integrity or obligations to others.  We lose our humanity when we take actions for our own personal gratification without at least being mindful of the happiness or well-being of those impacted by our actions.  The people in your community and in your personal relationships should be able to reasonably expect certain standards of behavior.  The most extreme example of this is the pedophile who finds happiness preying on children, should he act on this desire under his responsibility to own his happiness?  No, people who pursue happiness at the expense of violating others’ rights are held accountable for their actions.  A more common example is neighborhood communities.  I was the President of my Homeowner’ Association for several years.  During that time, I dealt with countless complaints about neighbors who agreed to a set of association rules when they moved in, but didn’t abide by them because they wanted to do something that wasn’t allowed.  This involved everything from owning more pets than were allowed, to parking campers and boats in driveways, to building sheds and play systems without approval.  These may seem like benign offenses, but they weren’t to the people who moved into that specific neighborhood because they wanted to live in a community that had these types of standards, and they had a rightful expectation of others who signed the same agreement.

This time of year, social media arguments over fireworks are rampant.  Those who want to celebrate our nation’s independence with nightly fireworks for a week prioritize their fun over veterans who suffer from PTSD and pet owners who have to deal with dogs who are terrified of the noise.  These groups can’t coexist with a “you’re responsible for your own happiness” mentality.  Inevitably, one group tells the other, “If you don’t like it, move to the country.”  Thoughtfulness for neighbors and a sense of community is thrown out the window.

On an individual level, think about the Black Friday shopper who rips a sale item out of the hands of customer who got there earlier.  The spouse who decides to purchase a car they can’t afford, or to quit their job without another one lined up while their partner tries to figure out how to make ends meet.  The single person who inserts him/herself into your relationship because their ego craves the challenge of getting a person in a committed relationship to stray.  Any one of those people could justify their actions with “This is what I want.  Your happiness is your responsibility, not mine,” rather than hold themselves to a standard of respect for their fellow man and prior commitments.

Of course, there are times when we need to make a decision that will be difficult on another person.  Consider the person in an unhappy relationship.  Their choices are to continue being unhappy or to end the relationship and eventually find someone they can be happy with.  The person only concerned with their own happiness lies to their partner while looking for someone else to be with, then ends things when they have a new relationship lined up.  The person who is mindful of both their rights and the rights of those around them realizes that their partner deserves the same opportunity to seek happiness elsewhere and ends the relationship so that both people can move on.  Both scenarios depict someone taking responsibility for their happiness, but the latter describes a person who pursues that happiness within the boundaries of socially acceptable treatment of another human being.